The dream of opening Staplehouse restaurant belonged to Ryan and Jen Hidinger and it began in 2009 as they started hosting a series of supper clubs in their home in the Grant Park neighborhood outside Atlanta. For 3 years the couple built up their customer base and although they didn’t have a brick and motor establishment yet, they were already well known in the restaurant community. Momentum was building and the promise of success was palatable.

Everything changed in December of 2012, when Ryan was diagnosed with Stage IV gallbladder cancer and was given six months to live. He was 35. Soon after the diagnoses, a benefit was held to aid in the medical cost and $275,000 was raised. This overwhelming love and support from friends, family and the restaurant community changed their perspective on life. That night, Ryan and Jen had a new idea and realized there was something significant they could accomplish in Ryan’s lifetime.

At Bicycle Tours of Atlanta, we could not be more honored to be partnering with Staplehouse on our street art events. To learn more, go to staplehouse.com and thegivingkitchen.org. 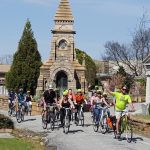 Welcome to the Bicycle Tours of Atlanta Blog!Community