With a city filled with mural artists, one must wonder how Joe Dreher, aka JoeKingAtl became one of the most active and employable street artist in Atlanta in less than two years. Once you know his story, there is no question the instinct to survive and his love of family, have been the driving forces behind his fast climb to success. Joe had shut down his architecture firm in 2008 because of the recession. Soon after, he started pulling away emotionally from his family and found himself in a deep depression. When his son’s teacher suggested they participate as volunteers with Living Walls as way to reconnect with Alex, his wife, Treasure didn’t give either one of them choice. She made sure they were on a Living Walls site supporting the artists the next day.

This experience for Joe and Alex started a course of healing. They continued to volunteer with other art organizations and growing their relationship. In 2014, when Alex was 16 they created a mural together in Cabbagetown. When Joe speaks of this time in his life, it’s very powerful. “In a way, Street Art saved my life. It got me out of a depression, it gave me back my relationship with my son and family, connected me to a community of artists. So, for me, I really feel indebted to it”, says Dreher.

Soon after the mural was installed in 2014, the phone started ringing. As a seasoned businessman, Dreher was able to respond to RFP’s, provide accurate renderings and deliver projects on time and within budget. This has certainly given him an edge in a city with equally talented and worthy artists.

Recently, the High Museum of Art commissioned him to paint a mural along Ponce de Leon to promote the Basquiat exhibit. A signature element of Joe’s work is a 3 prong crown. Basquiat also used a crown, and Joe’s symbolism was inspired by Basquiat’s use, which was showing approval of other artists’ works. “I use the crown as a way to elevate people and celebrate the significance of everyone”, says Dreher. There is a pyramid shaped pile of crowns painted at the base of the base. This gives visitors at the mural a chance to get a photo with a crown, no matter how tall or short they may be

Our Street Art Bicycle Tour explores a number of Joe’s murals. When possible, we visit him on site at installations around town. To learn more Joe’s work go to josephdreher.com. 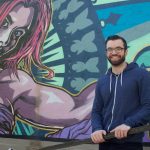